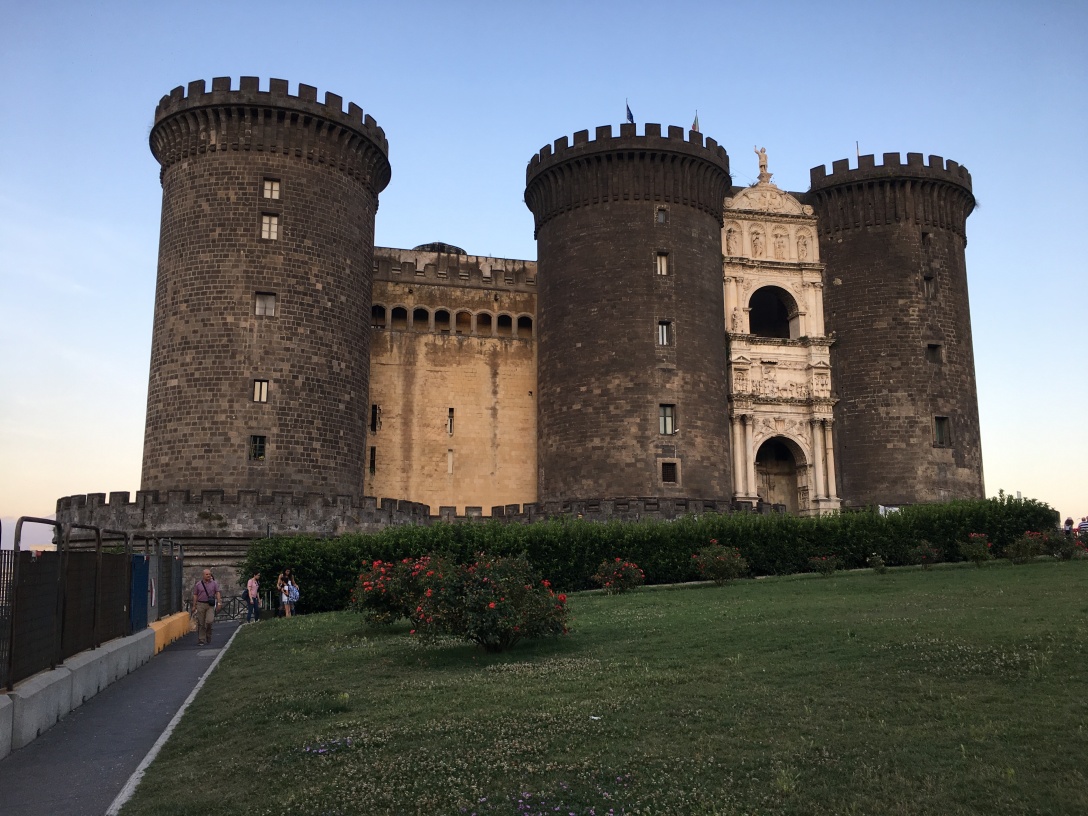 The trip to the rail station went well.  Previously, using the luggage carrier for my large 70 liter backpack had not worked so well.  The many cobblestones in Rome made it such slow going that it was necessary to take  a cab across town when I had to move.  Clearly unacceptable to a frugal traveler.  $20 can buy a few beers after all.  One must retain one’s priorities even in the face of adversity.  That said the transit to the metro station to get to the central Rome terminal required going down several cobblestone streets.  What to do.  The wheels of the collapsible luggage carrier were too small to make it.  Needed wheels with a bigger diameter.  Wait a minute…didn’t I have larger wheels with me in the form of a folding kick scooter?  Indeed I did.  It required a little engineering to attach the pack to the scooter in such a fashion that the entire rig could be easily carried up steps when needed yet still be readily removable.  The finished product was achieved using caribeeners and climbing slings…and it worked.  In fact it worked pretty well for a prototype. The rear attachment still needed some work but it rolled right over the cobblestones with little effort and only had to use one hand.  It was also entertaining to see peoples reactions to the rolling rig with not a few thumbs up and smiles as well as few heads shaking as if to say “what will they think of next?”

At the station, learning the process of finding the train and what platform it departed from was….as the English might say….good sport.  Those wacky Italians like to keep you guessing.  They put up what platform the train is departing from almost as an afterthought allowing 5 – 10 minutes for the passengers to find it and board.  I must say the trains are very punctual…not at all like they were 25 years ago when I last visited.

While there was just enough time to find the departure platform once it was posted on the big board…one had to wonder how many who were not familiar with the system did not make it.  The seats were assigned by number and by car and Lord help you if you were not where you were supposed to be when the conductor showed up..  As it happened,  got lucky and found the right car and seat with a few minutes to spare.  Life was good.  The train was clean and relatively new.  Blue leather seats and maple tables for each cluster of four.  They had the nest station on a LED screen so you had an idea of what stop was next.  On the map it looked like a good distance to travel in only two hours.  Looking up at a small monitor screen where ads were alternating with other pertinent information one could see the train was going 255 kph or over 120 miles per hour.  Nice.  Fast, but the countryside was generally open so it didn’t seem like you were missing the scenery.  One time I took the bullet train from Tokyo to Kyoto Japan.  Couldn’t tell you what the countryside looked like as we were going so fast it was mostly a blur.  Partly because there were houses and structures close to the tracks and partly because we were going fast.

Upon arrival it was a simple matter to find the metro and take it a couple of stops to a hostel called “Six Small Rooms”.  Followed the directions from the subway…and did not find the place.  Turned on the google maps and made a few laps around the area where it was supposed to be…and did not find the place.  Asked a lot of people…and did not find the place.  Finally a guy did know where it was and told me it was in the middle of a small alley…and did not find the place…until going back, knowing it was there, found a minuscule sign the size of a sheet of paper.  Finally.  Went up the steps to reception where they were very welcoming.  Small community room on the second floor.   My room was up another couple of flights of steps.  The building was old with huge windows and a rather funky charm about it.  The kitchen was on the top floor next to a room of several single beds.  No air conditioning, but several fans made it bearable.  Settled in to one of the beds.  There was also another common room next to the kitchen.  All of the common rooms had mismatched furniture of an old but comfy style.  Interesting place.  Hopped on the ole trusty scooter and went out exploring.

Naples, a city in southern Italy, sits on the Bay of Naples. Nearby is Mount Vesuvius, the still-active volcano that destroyed nearby Roman town Pompeii. Dating to the 2nd millennium B.C., Naples has centuries of important art and architecture. The city’s cathedral, the Duomo di San Gennaro, is filled with frescoes. Other major landmarks include the lavish Royal Palace and Castel Nuovo, a 13th-century castle.

Built on hills on overlooking the seaport on the Tyrrhenian sea, Naples is a busy city.  The downtown area is serviced by a good metro system.  Surface buses and trams help getting around.  The feel of the city is not as polished as Rome.  Rather like Brooklyn as opposed to Manhattan.  People were generally friendly. At night it was a common practice for people to gather at the public squares and fountains and have a beer.

Open containers were not a problem.  Beers were about a dollar.   Guy at the hostel told us about a couple a good pizza places just a couple of blocks away.  Good personal sized pizza’s were about $5.  Enjoyed the couple of days here as well as a day trip to Pompeii. I would have to say Napoli is to Rome as Brooklyn is to Manhattan.

The party scene was rocking at night in many squares. Had to represent.